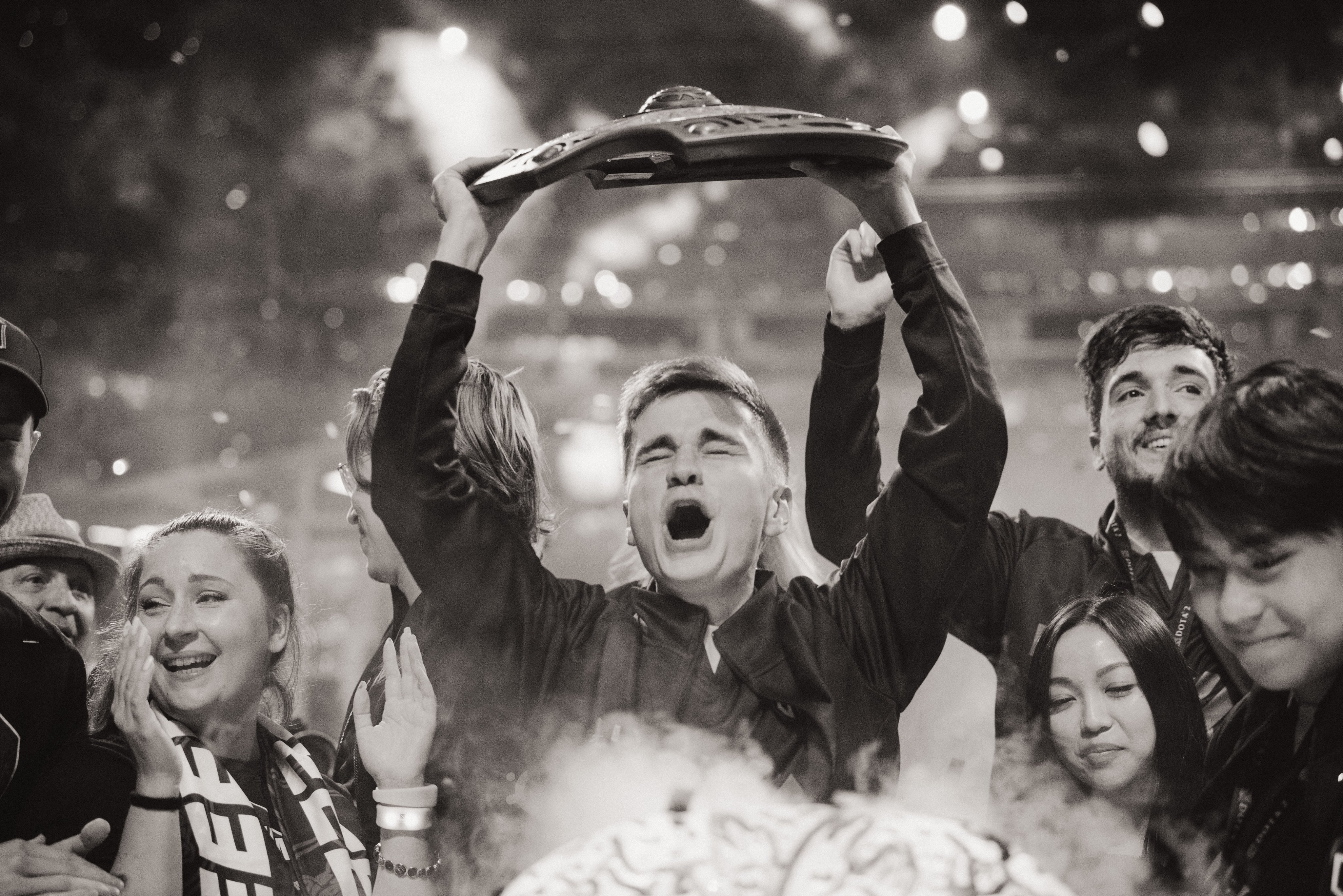 The International 2019 came to a close as OG made history as the first ever 2x champions. Congratulations to N0tail, Ceb, Jerax, Ana, and Topson who cemented their status as the greatest team in Dota 2 history.

Also let's give a huge shout out to Team Liquid for their historic lower bracket run all the way to the grand finals. Not many people thought Team Liquid would make it far at TI9 but they only lost 1 game in the entire lower bracket.

And let's not forget the 14 other teams who lived the Dota 2 dream and played on the main stage at The International.

There is a lot to say about what happened at TI9 and here is a look at the top performers at TI9 by the numbers.

Most Kills In A Game

The total amount of kills was surprisingly low at TI9. Only w33 was able to get more than 20 kills in a game. Topson occupies 2 of the top 5 spots with MidOne and Armel at 2/3. 10th place is a 7 way tie with 7 different performances securing 13 kills in a game.

Most assists in a game 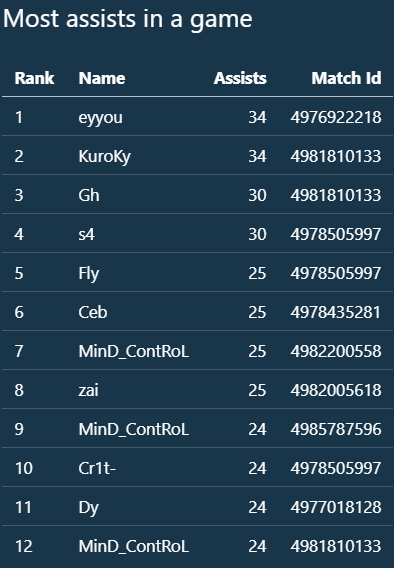 The top two spots for most assists in a game go to eyyou of TNC and Kuroky of Team Liquid. Both of these matches were Ancient Apparition games and with Tiny as teammates. Mind Control makes 3 appearances in this list as well.

Most deaths in a game 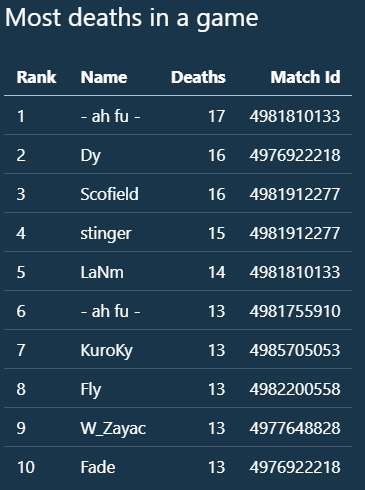 And in the leaderboard you don't want to be in, the most deaths in a game! Ah Fu of RNG tops the list with 17. Looks like there are no cores on this list, so good job to all the cores at TI9 for not dying as much as their supports did.

Most camps stacked in a game 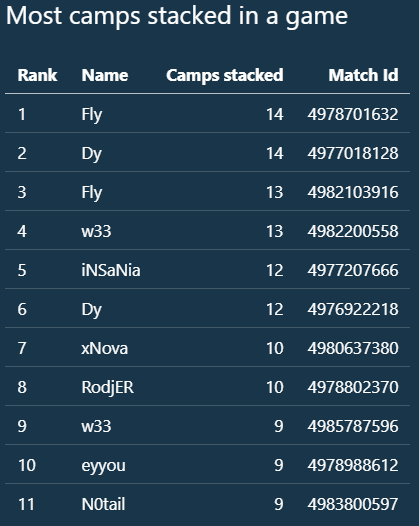 One of the hot topics about the TI9 meta was camp stacking. By stacking camps, you help your cores farm faster than your opponent. OG made this famous but it was former OG captain Fly that tops the list and makes 2 appearances. w33 is the only core player on this list and he appears two times. w33 played many Meepo, Tinker, and Templar Assassin games who can stack camps without leaving the lane.

Most gold per min in a game 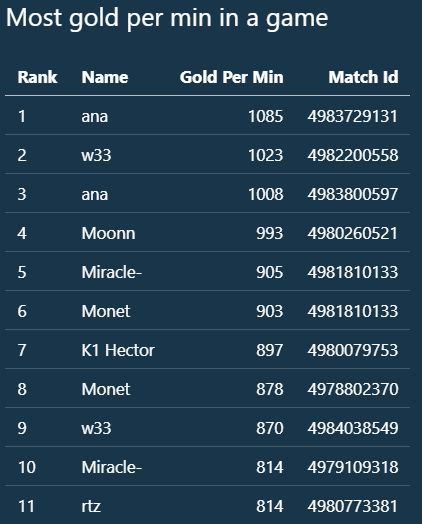 This leaderboard is maybe misleading as the top 5 players all play Alchemist who has inflated gold per minute statistics. The famous farmer Hector is 7th and in that game he's playing Wraith King with a Magnus teammate. Monet played Gyrocopter for his 903 GPM game in a 1 hour and 18 minute game.

Most observer wards placed in a game 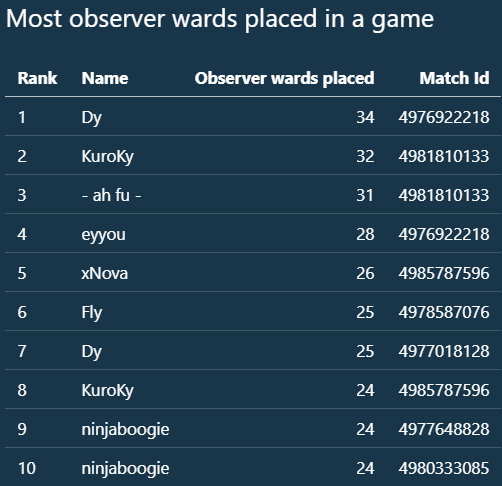 Finally a leaderboard where the position 6 shines. Dy tops the list at 34 observer wards placed in a 1 hour and 16 minute game against TNC.

Highest hero hit in a game 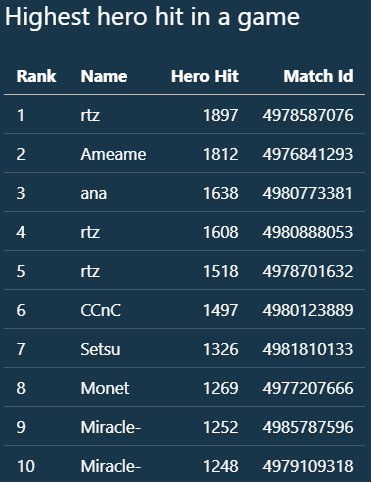 The top heavy hitter goes to RTZ with a whopping 1897 damage in 1 hit. That game was over an hour long and RTZ was playing Sven with Tidehunter as his teammate who has an armor reduction spell and Solar Crest item. Second place goes to Ame who was playing Phantom Assassin as he skillfully crits for 1812 damage.

Most last hits in a game 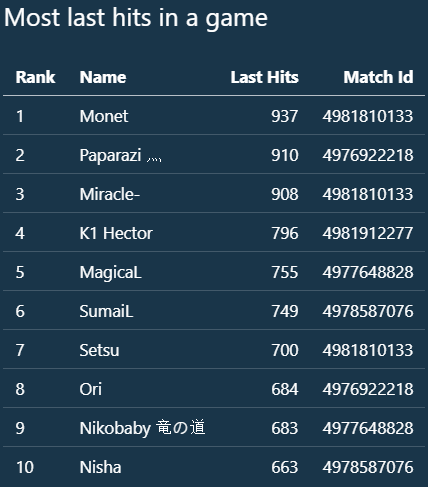 The best farmer at TI9 was Monet of Royal Never Give Up. This top 10 list doesn't feature OG cores who are more known for fighting, killing, and ending the game early VS farming in long drawn out games. But let's give props to the ones who made the top 10 list and played their role as cores who are meant to farm.

What other statistics do you want to see for who did the best at TI9 for future posts? ^^ The lists should be text instead of images ¬¬

Most versatile player (most heroes picked) Stats that don't compare between players' values (gold, xp, kills, etc) between several games are hardly interesting, since they give a very skewed representation of performances. Please consider adding this element to your next articles so that stats are given their fair due.

@CMENViktory I tried but unfortunately I wasn't able to get the blog post to properly format as a table so I had to post it as an image. These number just grow with the game length, how is it even useful?

pls give us balls scratched per game. It would be interesting to show best performance with a hero. IE who had the best game as Tiny and so on for each hero. I think most last hits was matu and most kills sumail

@topsonam These stats are only from the main event and not the group stage!