DPC Week Four: Back from the Break 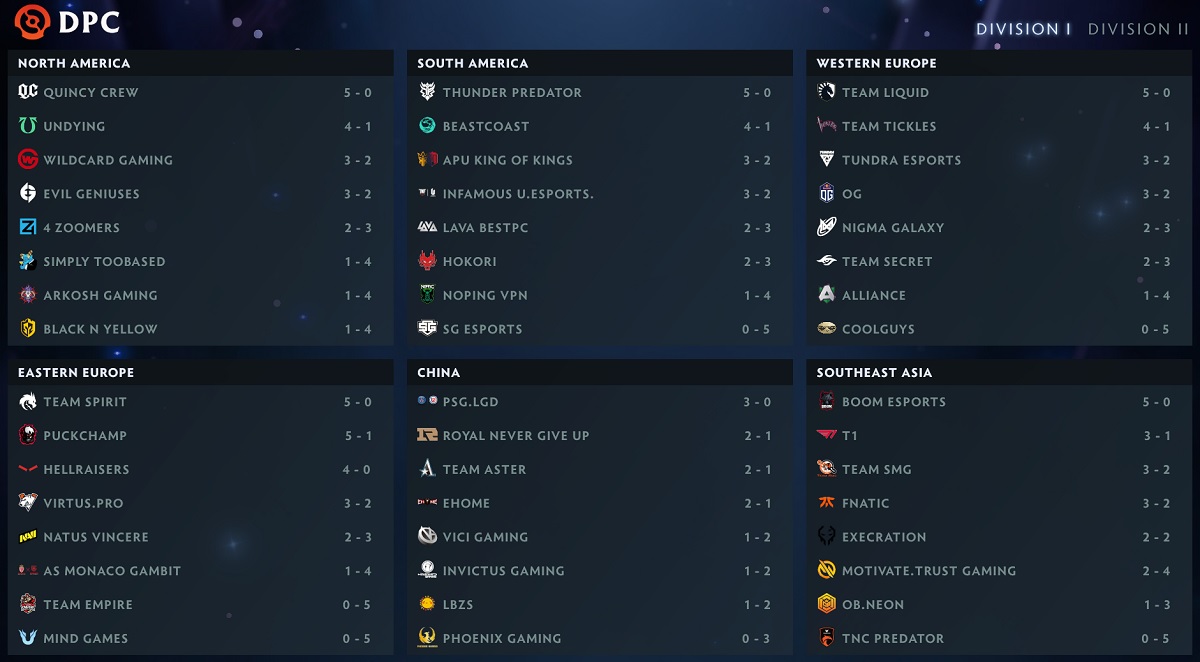 After an extended break the DPC is finally firing on all cylinders once again. Week four had a couple of really unexpected results and is showcasing how unpredictable the Chinese region can be this time around.

The biggest news is that Team Tickles, of all teams, is currently the second seed in the EU region. They are by no means a new team, consisting mostly of ex-Viking squad, but their performance so far has been rather unexpected: they are punching above their weight, it feels.

Both Nigma Galaxy and Team Secret are in a position where making it to the Major can be very problematic. Both of them are playing COOLGUYS, which should not pose a significant threat, however the former are also playing against Team Liquid, while the latter will have to face Team Tickles.

Young blood keeps dominance in the Eastern European region. Team Spirit, PuckChamp and HellRaisers are unrelenting on their way to the Major, perhaps even prompting a Virtus.Pro roster change.

The latter still have a chance for a Major as long as they can win against both Na’Vi and Team Spirit. Highly unlikely, given the recent results, but a sliver of hope nonetheless.

China is finally joining the DPC race and it is a bloodbath. We have an obvious apex predator with PSG.LGD once again proving that they are the dominant force in the region, but after that we have multiple notable teams fighting for the remaining three slots.

Chinese teams now has a consistency problem: the formerly most disciplined and stable region is showing cracks in its Tier One scene. Or perhaps we are misjudging and what looks like missteps by the veterans of the scene is once again the power of youth taking over: EHOME with their young squad are looking really great and even LBZS managed to take a series off of RNG with their TI8 runner-up lineup.

The Neon potential comeback shouldn’t be a surprise to anyone who watched Huya Winter Invitational at the end of last year and their win against T1 is not a fluke — the team finally found its footing, though probably a little bit too late for a Major slot. Though with three games in reserve everything can happen, especially in the SEA region.

BOOM Esports, a last-minute addition to Division One is continuing their lossless run, while everyone else, T1 now included, are fighting for the remaining two Major slots. Once again, a reminder to all the viewers, that SEA is by far the most exciting and unpredictable region and if you have limited time to watch Dota it is probably the best region to concentrate on spectacle-wise.

Discontinuing the experiment of having a former CIS carry player playing position three on your roster is already yielding results for Evil Geniuses: a confident, if a bit long, victory against 4Zoomers is a confidence boost the squad needs if they intend to make it to the Major. They will be facing both Undying and Quincy Crew as their last two opponents and they more or less need a victory against both.

The latter are still to lose a series. While their performance wasn’t clean 100% of the time, it should be clear by now that they are the strongest team in the region and the most likely direct playoff invite to the Major.

Beastcoast lost a pretty crucial game against Infamous and while their position is still solid, given how they are yet to face Thunder Predator, it could potentially turn into a problem, or at least a tiebreaker.

Both Infamous and APU King of Kings are also gunning for this last SA slot. Provided they win their games against Lava and Hokori respectively. The tiebreaker scenario only occurs if Beastcoast loses to either SG Esports (unlikely) or Thunder Predator. Overall, it feels like the least consistent league is having the most predictable outcomes so far, which can be seen as a good sign for the region: some semblance of stability is a welcome sight, especially after a disastrous The International performance.

Kunkka is slowly taking over the DPC and is now the 7th most popular hero across all regions with a 60%+ win rate. Rivalled only by Bane in his success, Kunkka feels like a natural response to several meta developments.

Most importantly, he is frequently an answer to Queen of Pain in the middle lane. He is among the few heroes who can actually win this matchup and is a great counter to the hero in the midgame: the boat buff is exceptional at preventing QoP (or any burst hero for that matter) from executing their game plan.

We’ve also seen a couple of position one Kunkka attempts, but they were so infrequent and felt so forced that it is hard to comment on the concept’s effectiveness. It could be a good adaptation during a Captains Mode draft, especially with a “carry from midlane” hero like Templar Assassin or Lina setup, but is probably not a good idea for your everyday pubs.